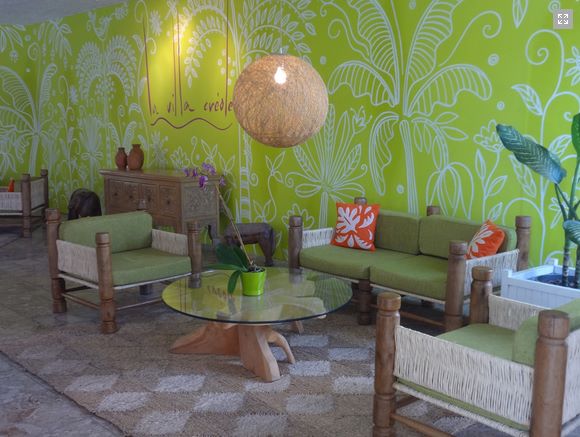 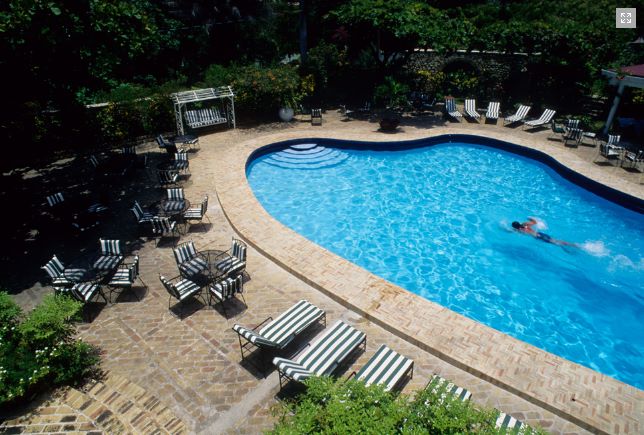 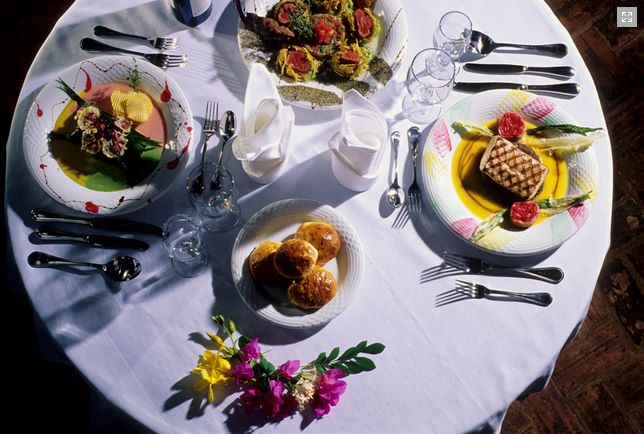 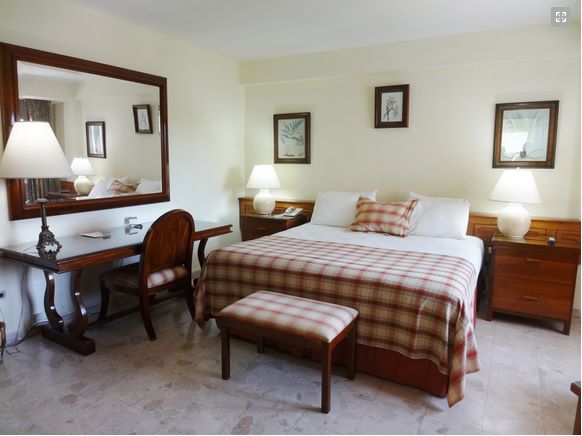 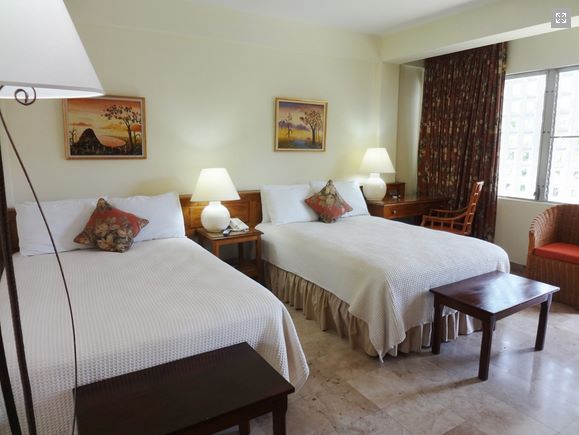 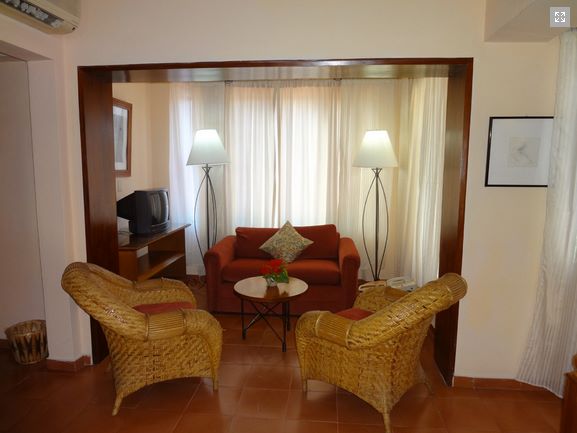 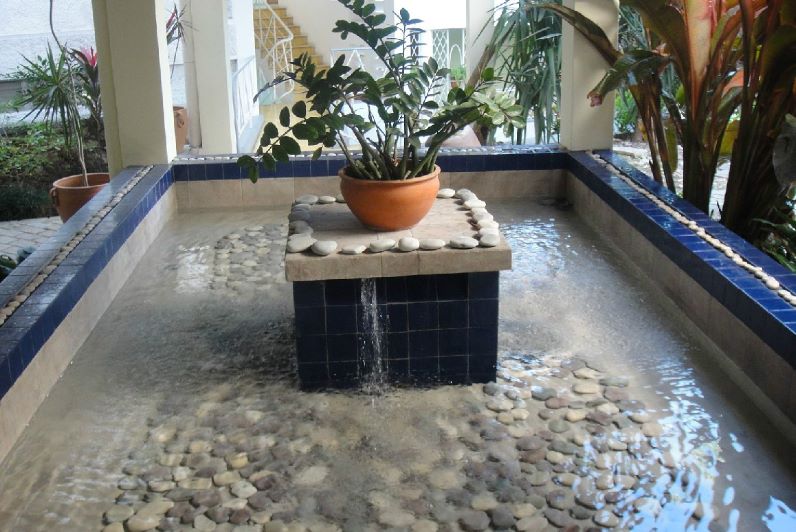 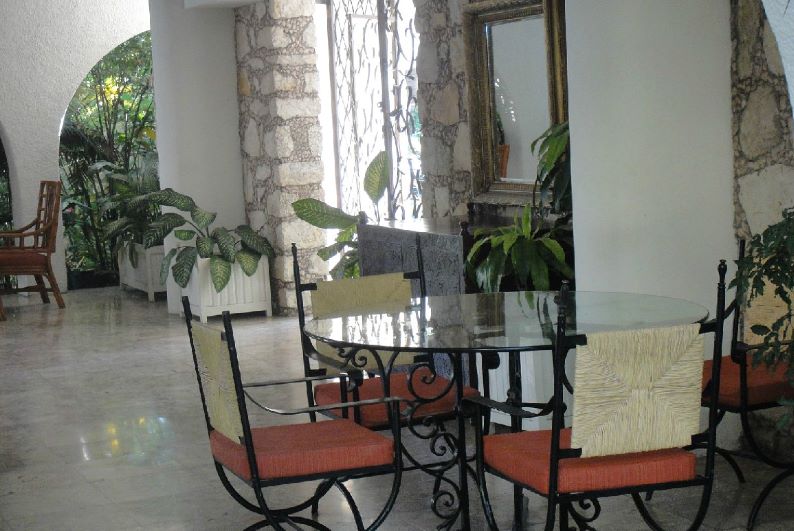 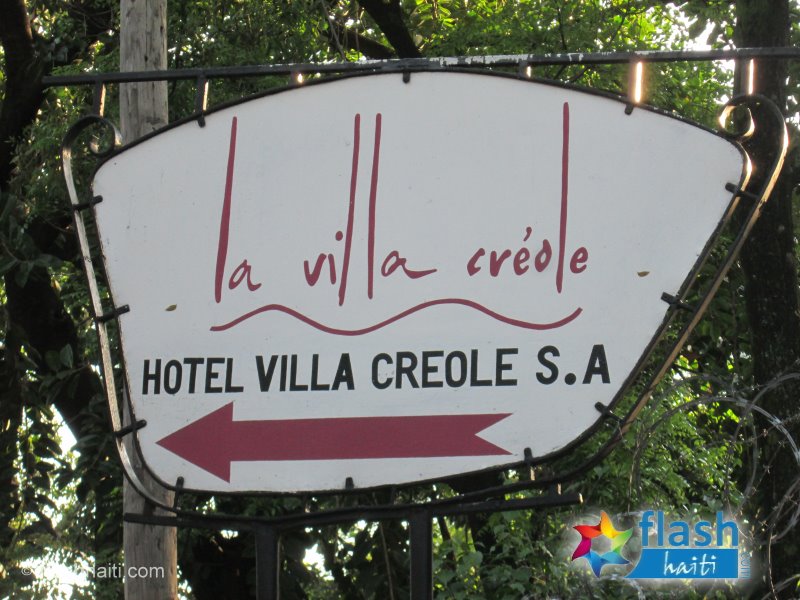 Hotel Villa Créole is located on a quiet street in Pétion-Ville, in the cool hills above Port-au-Prince, just minutes from the business center of Pétion-Ville, Haiti’s famed art galleries, restaurants and night life.

Our mission is to uphold the more than half century tradition of offering discerning travelers discrete, unpretentious but gracious service, impeccable and comfortable accommodations and a friendly and attentive staff… compliments of Hotel Villa Créole!

With your comfort as our utmost priority, we go out of our way to extend our warm hospitality and to help make your stay in Haiti a pleasurable one away from the hustle and bustle of the city.

Unwind in our over-sized tastefully furnished rooms in either a King size bed or two full size beds. These spacious rooms allow for a sitting room. Ambassador Suites have a private living room and a balcony. The furniture is made out of locally carved massive wood and wrought iron adorned in warm, elegant fabrics to create an atmosphere of intimacy and comfort. There is ample dedicated work space available. Some of these rooms can be configured as connecting rooms upon advance request and when available. Air-conditioning, flat screen satellite TVs, direct-dial phones, complimentary wireless Internet access, refrigerators, hair dryers and safes are standard.

Breakfast is included with your stay

Under the canopy of our treasured Almond tree, a delicious breakfast, included in the price of your room, is served by our friendly staff. From croissants to local fresh fruit, the Villa Creole breakfast is the best way to start your day.

Check in time is 3pm.  Should you arrive earlier and your room is not ready, we will be happy to store your baggage for you.

Check out time is 12pm.  Please call our reception if your departure is delayed. We will make every effort to accommodate you. We are happy to store your bags after checkout as well.

An air-conditioned meeting room for up to 10-12 people is available for rental. Please inquire at the front desk.

Complimentary access to high-speed wireless Internet is available for our registered guests throughout the entire hotel. If you prefer, we also offer secure hard- wired connections in all guest rooms and suites.

*Rates include breakfast and are subject to change without prior notice.   Our rates are quoted in US dollars but are also payable in gourdes at the current HVC rate.

From in-room Internet access and cable TV to keep in touch, to sporting facilities to stay in shape, to tranquil gardens and exquisite public spaces for relaxation, Villa Creole has everything you need for a productive and relaxing visit to Haiti.

Our most important resource, however, is our staff. You will find them friendly, attentive and committed to insuring that you enjoy your stay.

Breakfast under our poolside almond tree starts the day, with a selection of tropical fruits and juices, as well as hearty international favorites. Try our French toast; it is the best you’ve ever tasted.

You will be able to savor a mix of local and international flavors from our full lunch and dinner menus poolside. Choices include a seared salmon with oregano vegetable Napoleon with a passion fruit reduction and a beef tenderloin over apple and red wine chutney. Vegetarians will love the eggplant parmigiana with creole tomato sauce and cauliflower puree.

With 40 comfortable guest rooms, a distinctive ambiance of traditional elegance and stylish design, we, at the Villa Créole, strive to provide a relaxing and harmonious atmosphere with just the right touch of highly personalized attention. More than a philosophy, it is who we are.

Throughout your stay, experience the serene, casual, unassuming setting of our gardens and public areas. Discover the unified and distinctively Haitian flavor of our décor made visually appealing by use of layouts which are clean in style, comfortable and effective in use.

We try our best to sweep you off to tranquility and make your home away from home the ultimate retreat from the daily Haiti experience.

Frantz, our general manager, brings more than 40 years of experience to the Villa Créole. He joined the team when he was a mere teenager. He is by far the only employee who can claim to have worked and acquired experience in nearly every department of the hotel. He rose through the ranks steadily over the years distinguishing himself in ways that left his peers far behind. He is a natural to the trade. Most recently, Frantz attended a Professional Development Program in Hospitality Financial Management: Operations Decision-Making at the well-known Cornell School of Hotel Administration.

Family owned and operated with a distinctive touch since its founding nearly 70 years ago, the Hotel Villa Créole occupies several hectares of wooded and superbly gardened property in the heart of Pétion-Ville.    From its early beginning as a guest-house in the mid 1940′s, founders Dr. Reindall Assad and his wife Lina Wiener Assad established Villa Créole as a beacon of Haitian hospitality for business and leisure travelers.

Reindall, nicknamed Dadal or Doc by all was a cancer specialist by trade. He graduated in the late 30′s from the Institut Curie in Paris and introduced radiology in Haiti. His clinic, which he sold to his partner when he became a full fledge hotelier, still stands on Rue Oswald Durand.

Lina, an autodidact, passionate with philosophy, started the guest-house in their home that was to later become the Villa Créole. Early on, she fell in love with Haitian Art. Her passion, coupled with her work at the hotel and her interest in helping those less fortunate became her lifelong endeavor. She was actively involved in the creation of the Centre d’ Art and was one of the founding members of the Haitian Hotel Association.

In its early years, the Villa Créole was a popular meeting place for local artists. The couple hosted lively buffets and barbecues on Monday and Thursday evenings. These events were highly entertaining as they were animated by local troubadours (usually a four men musical group) which regaled their audience with typical popular songs. Waiters and waitresses filed pass tables wearing local garb with tall pointy hats for the men and wrapped foulards for the ladies. Oftentimes, more entertainment in the form of fashion shows and folkloric dance shows filled the evenings.

In the late 70′s, a very dear friend of Dadal and Lina joined the family: Max Sam was a dentist by trade, an intellectual and a true gentleman. He embraced the Public Relation role at the Villa Creole like no one else could. His friendship with the Assads never wavered.

In 1979, the Assad’s were joined by their daughter Alicia, who apprenticed under the tutelage of her parents for a couple of years before she was joined by her sister Ariel. Lina retired early on to concentrate on her many other interests leaving her husband, Ariel and Alicia in charge of managing the hotel. In the early 1990’s, Roger Dunwell, Ariel’s husband, whom, during the early years, had been involved part time at the hotel, joined the management team in earnest and took the lead to manage the family operation. Cassandra Dunwell, daughter of Ariel and Roger, worked at the hotel for a few years during that decade and Melissa, the second daughter of Roger and Ariel, joined the Villa Creole in 2005.

Today, the hotel is managed by Melissa and Alicia with the help of a highly dedicated team headed by General Manager, Frantz Rimpel, who made his debut at the Villa Créole back in 1966!

Against all odds, Villa Créole stood as a bastion of Haitian Hospitality. It affirmed its international reputation by maintaining high quality accommodations, inviting public spaces and beautiful landscaping. The gracious surroundings reflect the warmth of the Haïtian style and culture. The décor is simple, mainly local and refined. The ambiance celebrates culture and tradition and is infused with a personal touch in the many facets of the daily operations. The beautiful tropical gardens merged to create a genuine and authentic guest experience.

The Villa Créole enjoys strong customer loyalty and is a signature property in Haiti.

We are smaller following the losses caused by the devastating earthquake of January 12th, 2010, but un-deterred. We are working diligently on our future transformation. Please stay tuned.

Tête L’Etang is a small community located near the town of Aquin in the south of Haiti. The inhabitants live from fishing, farming and agriculture. In order to attend school children had to walk 1 ½ to 2 hours to the nearby districts of either Flamands or Vieux Bourg d’Aquin.

In 1998, the Villa Créole took an interest in the people of Tête L’Etang and organized a meeting with the community to prioritize their needs. It was recognized by all that the most pressing need was to establish a school. The Villa Créole owners began with the construction of 4 classrooms and then later on built 4 more classrooms.

Slowly but surely, the school began to take shape. Teachers were hired and students were enrolled. A water purification system was installed with the help of the organization Hope for Haiti. The investment while modest transformed the community and served to unite the people of the locality. The school not only became the center of socialization for the children but also for the parents and residents of the hamlet as they gather for community meetings, parties and social gatherings.

In 2010, Hope for Haiti joined the Villa Créole in supporting the school of Tête L’Etang. 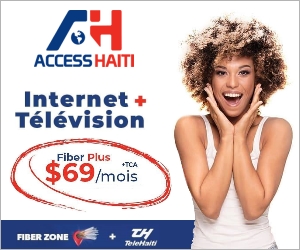 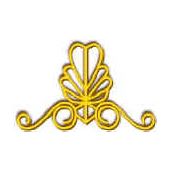 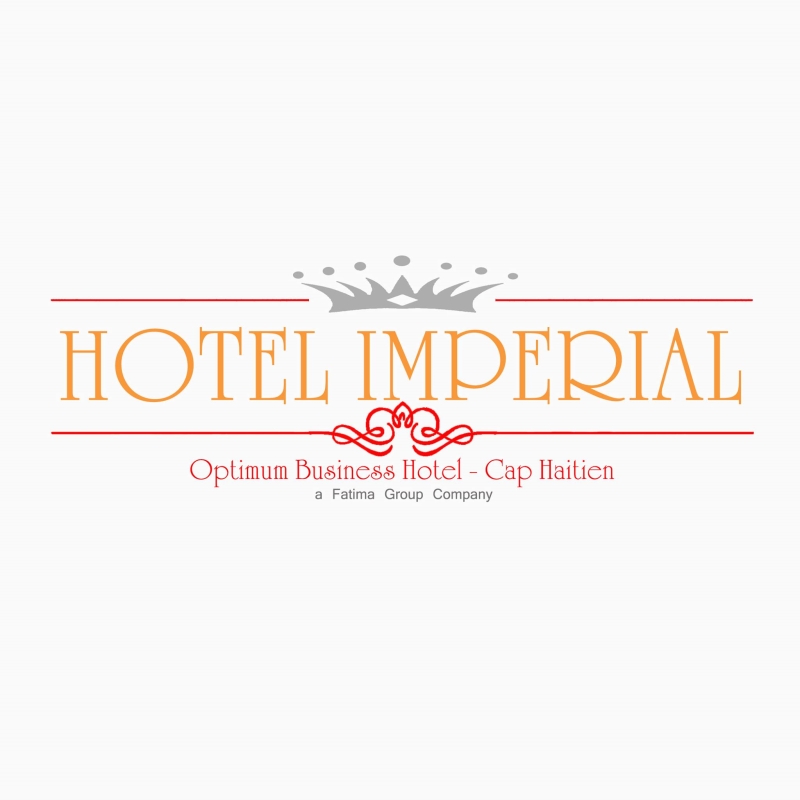 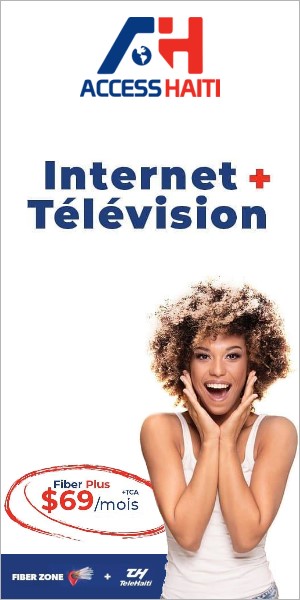