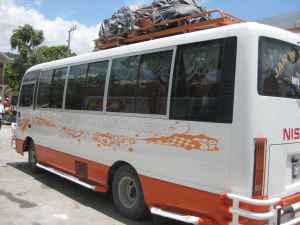 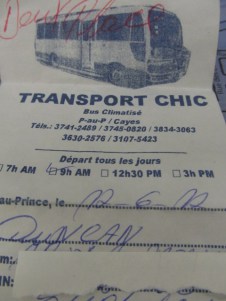 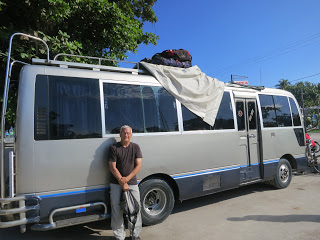 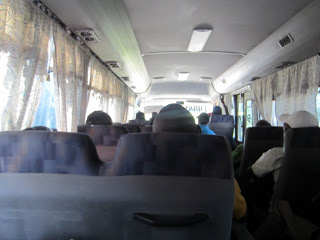 ...we took the Transport Chic bus back to Port au Prince from Les Cayes.  The bus was great!  And air conditioned. It stopped in Miragoane for a bathroom and food break at a restaurant/convenience store. It dropped a couple people off at the towns closer to Port, so you could probably hop off anywhere along the way.  And the ticket was only $10.  You buy it at the bus station the day before.

They strapped luggage to the top of the bus (you get to take one piece of luggage-on-top for free, and no one asked for a tip to put it up there or take it down).  The stop in Les Cayes is along the main road into downtown, Ave. des Quatre Chemins.  We had a 9am ticket for a bus that didn't leave until 10am.  But you want to be there in time to get on first so you don't end up with the little middle aisle seat that folds down.  And sitting up front might make you nervous - you'll see all the things that the bus is trying to pass, and all the traffic coming toward you.  We were oblivious to this in the back row, except for Don who could see right down the aisle.

The stop in Port is across from the stadium, at a very busy intersection.  The Transport Chic office building is painted purple.  We arrived at the terminal at 2:30pm, so it was a 4.5 hr ride, with about 20 minutes at the stop in Miragoane around noon.  We passed through Leogane around 12:30pm.

As the name implies, Transport Chic is indeed a fancier way of traveling from Port-au-Prince to Les Cayes (and back)!  On a good day, the trip is 3-3.5 hours. The waiting area in Port-au-Prince is well-covered with fans and there is TV, in our case, Hannah Montana dubbed in French. On each trip, we met Haitian Americans back visiting family!

Departure times from Les Cayes: our bus left at 7:30am, call for rest of schedule.

Tickets: $10 USD each way, payable in USD, acceptable everywhere in our experience.

The bus makes one stop at a convenience store where there are public restrooms, Doritos, Pringles and delicious ice cream.