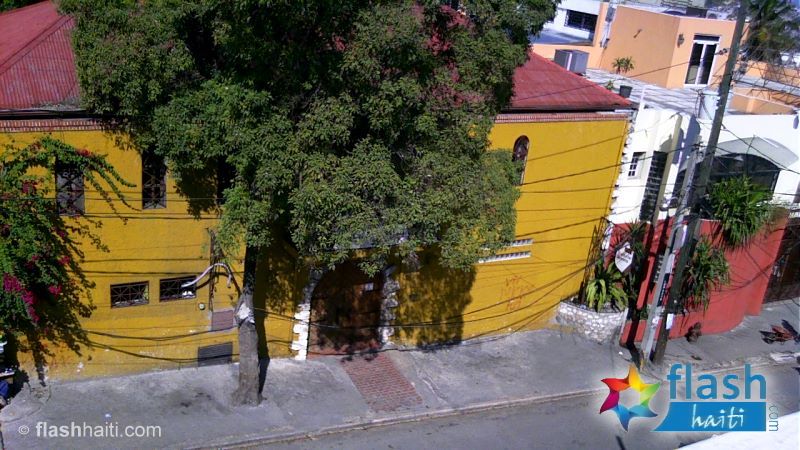 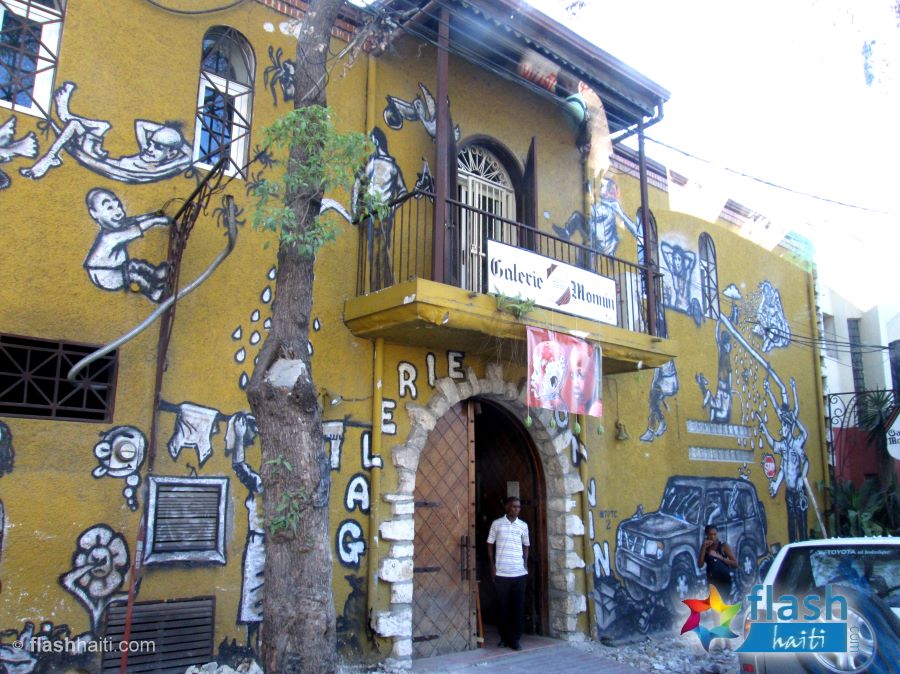 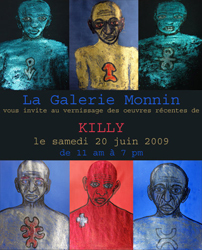 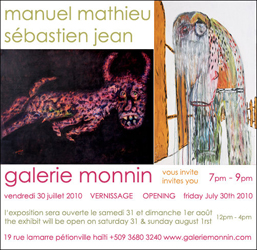 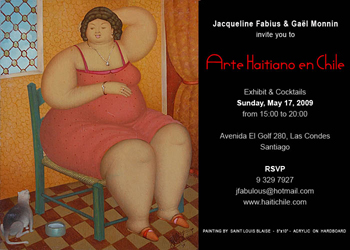 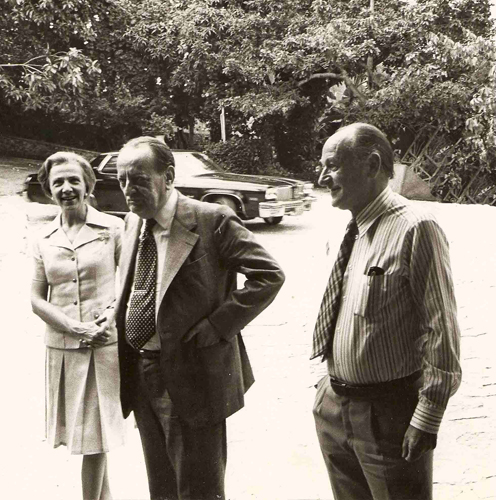 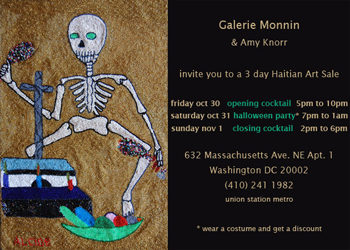 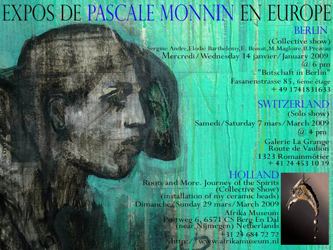 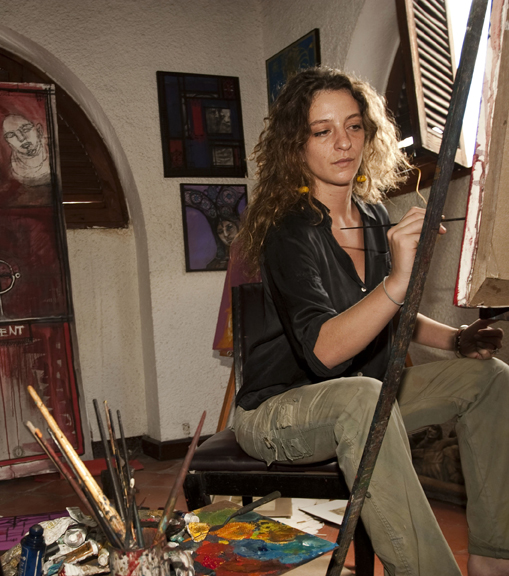 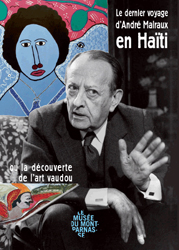 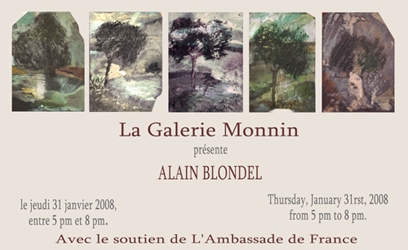 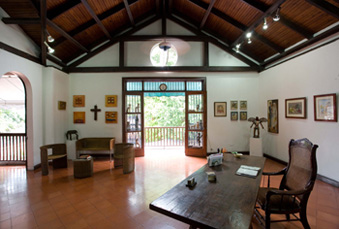 In 1947, Mr. and Mrs Roger Monnin both from Jura, Switzerland settle down in Haiti. The country is at a socio-cultural boiling point.  President Dumarsais Estime is fervently preparing the “Exposition Universelle du Bicentenaire de la Fondation de la ville de Port-au-Prince” (Universal Exhibit of the Bicentennial of Port-au-Prince). Dewit Peters who is the Cultural Attache at the American Embassy creates the Centre d’Art.   Thanks to Peters unique skills of assembling many different artists under one roof the naïve Haitian painting style reveals itself to the world in 1944.

The Monnins who were actively involved in art promotion in Switzerland  spontaneously jump into all the fast growing artistic events in Port-au-Prince that have never  before seem such effervescence.  Freda Monnin takes drawing and painting lessons from Max Pinchinat and Roger Monnin becomes an actor of the “Societe Nationale d’Art Dramatique”  playing in several theater pieces at the Rex Theater. Both of them develop a friendship with Peters and buy paintings from artists who become the great masters of the naïve Haitian painting style:  Hector Hyppolite, Castere Bazile, Rigaud Benoit, Préfète Duffaut and many others.  It is from this melting-pot that the first painters,  Calixte Henri, Roland Blain and Yves Lafontant  are selected for the dedication of the Galerie Monnin in 1956 at 382 Boulevard Jean Jacques Dessalines in Port-au-Prince.

1968 marks the first turning point in the Galerie Monnins’ history when Michel and Lena, the second generation of Monnins join their parents.   Michel feels that the sacred or vodou art of the 40’s, 50’s, and  60’s are running short of breath ant that the young artists seeking to branch out are looking for an orchestra leader.   Among them:  Fritzner Lamour and Murat St-Vil who are students of Préfète Duffaut; Serge Moléon Blaise and his brothers St-Louis, Fabolon and Ti-André who are breaking away from the Cap-Haitien School of Philimé Obin; Eric Jean-Louis, Fritz St-Jean, Roosevelt Sanon … and later, Yves Michaud, a great friend and admirer of Carlo Jean-Jacques, who together with Calixte Henri and Decollines  Manès  animate the gallery’s workshop.  It is in this studio that Camy Rocher, Nicolas Dreux, Cameau Rameau, and many others take their first steps.

These artists are the ones who become the painters of the Galerie Monnin School. The Modern-Primitives who Jean-Marie Drot, a friend of the family and an art critic, presents abroad through several renown exhibitions under the heading “The painters of  Haitian  Space”.  In the paintings of these artists the spontaneous naïve style takes a back seat to more sophisticated techniques where the esthetic research, the careful concern for detail and color coordination give an unprecedented quality to their work which in some ways can be related to those of the Flemish and Italian primitives of the Renaissance.

Later, some of the artists guided by Michel Monnin flirt with fantastic and oneiric art: the birds become landscapes, the stars are in free orbit, the cows are red, the pigs fly, and the cats are dogs and don’t know it. The sweetest dreams, the craziest ones are captured on the canvases of Fritz St-Jean, Jean Louis Senatus, Roland Blain, Roosevelt Sanon and St-Louis Blaise.  One is also happily plunged into the aquatic world of Maurice Vital and Andre Blaise.

The second turning point of the gallery, around 1987, takes place a couple of years after the construction and opening of the Galerie Monnin at 19 Rue Lamarre in Pétionville.  Frantz  Zephirin, a diabolic and bulimic seraphim, becomes Michel  Monnin’s friend.  Both of them enjoy esoteric  activities and they tell each other stories where reason becomes shaded to the benefit of the imagination.  Zephyrinus, the nickname that he gives to himself is a workaholic. He paints night and day huge quantities of canvases signed with cabalistic numbers while his partner writes accompanying texts for exhibitions which have not yet occurred. The devil as well as the angels have wings and Zephirin flies often to France, Germany, Holland, Denmark, theUSA, Panama…

A few years earlier, Toni Mosesman, a Texan beauty, had thrown her lasso around  the director of the gallery which was at its highest apogee in a glorious Haiti, the pearl of the Antilles. This unequal and always smiling saleswoman happily assists Roger Monnin whom she replaces in 1994 at the time of his death.

Pascale Monnin, the “prodigal child”, comes back to her country the same year and right away forges a place among the contemporary artist.  This is largly due to the originality of her work.  With her skills, high spirit, and big heart, she makes friends with the artists Mario Benjamin, Ronald Mevs, Dodard, Pasko, Djinn and Désarmes who dream of a new style of Haitian painting more in sync with current international spheres of influence.

Her sister Gaël, a communication, public relations and computer science specialist carries on with determination the heavy load of responsibilities that her grand-father and father have legated to her.  Both women, Pascale and Gaël Monnin, “soeurs marassa” twins of the third generation realize that a face lift to rejuvenate the gallery is necessary to assure the gallery’s continuation in the difficult context of an Haïti fighting its eternal devils.
The gallery for more than 50 years has continued to strive to be the avant garde of the artistic and cultural development of Haiti more....