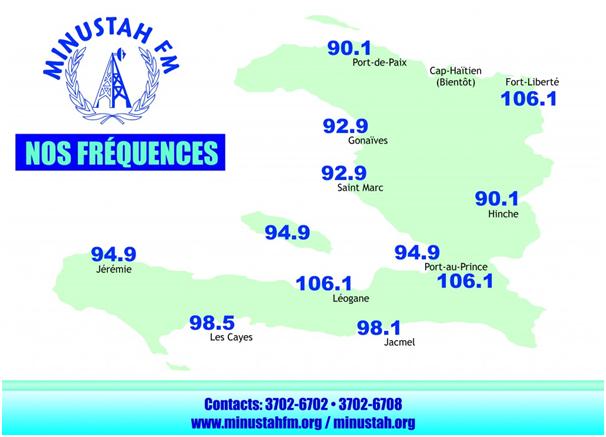 Minustah FM is the radio station of the 10,000-strong
UN peacekeeping force in Haiti.

The station defines itself as a public service
broadcaster.

Since the 2010 earthquake, much of its programming has
focussed on humanitarian assistance and reconstruction.

From September 2012, the station
was planning to shift the emphasis of its programming more towards development
issues – particularly health, education, and the environment - and development
of the rule of law.

About 80% of the programmes are in Creole. The rest are in French.

Minustah FM began broadcasting on the internet in 2007
after the government of President René Préval refused to grant it a broadcasting licence.

However, the station finally managed to go on air in 2008, after arranging to buy air time from several local FM stations. Most of these
belong to MBC, the radio arm of the Le Nouveau Matin media group.

However, since the 2010 earthquake, it has been
broadcasting constantly round the clock.

In September 2012, Minustah FM was broadcasting from
the following locations:


The station was temporarily off air in Cap-Haïtien, but was due to resume
broadcasting there shortly.

Minustah FM is managed by Walter
Mulundi, who formerly worked at Radio Okapi, the UN radio station in the
Democratic Republic of the Congo (DRC).

The Editor-In-Chief is Hugues de
Roussan, a former journalist with Radio-Canada.

Minustah FM has a mainly Haitian
staff of 43, of whom 30 are journalists.

However, the station is run by
seven expatriate managers.

Despite its size and reach and
the high professional standard of its programme production, Minustah FM does
not command a regular wide audience.

The radio station
does not stand out in the mind of the public as a popular and trusted source of
news and information.

Many Haitians
regard Minustah FM as a propaganda station for MINUSTAH, even though it enjoys
greater editorial independence from the command of the UN peacekeeping force
than RNH does from the Haitian government

It does not appear on DAGMAR’s
ranking of the 30 most listened to radio stations in Port-au-Prince in November
2010.

However, an internal survey conducted
by MINUSTAH in 2010, indicated that 32% of the population listened to the
station – at least occasionally.

Minustah FM’s main
programmes are: a daily news programmes in French and Creole, a general magazine
programme, Tous pour Haïti (Everyone
for Haiti), and Espace Public (Public
Space), a discussion programme which focuses on current issues in the news.